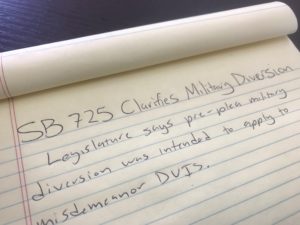 In my previous post regarding Penal Code section 1001.80 pretrial/ pre-plea military diversion, I wrote about a California Court of Appeals decision (VanVleck) holding that military diversion is unavailable to military veterans and current service members charged with a DUI.  Since that time, a different Court of Appeals ruled that pre-plea military diversion is available to DUI defendants. (Hopkins v. Superior Court, (2016) 2 Cal.App. 5th 1275.)  The CA Supreme Court granted review of these cases but has taken its time hearing the matter.  It therefore, has taken no action to assist military members/ veterans in this very important issue that has had negative impacts on our military and veteran troops.  The good news is that, despite the CA Supreme Court’s inaction, on May 4, 2017, the CA Assembly passed SB 725 with a 38-0 vote in its favor.  The purpose of SB 725 was to clarify for the courts that Penal Code section 1001.80 was intended to apply to DUI charges.  The bill must still be signed by the Governor in order for it to have effect.

SB 725, if approved by the Governor, will make military members/ veterans eligible for pre-plea misdemeanor military diversion once and for all.  So long as the defendant can establish the criteria for eligibility, even those charged with driving under the influence should be accepted into treatment in lieu of punishment.  This would be a major victory for veterans and military members, and those who support American troops.

The current state of the law is that unless the veteran is in the particular district that the VanVleck court ruled (Butte County is not), it’s up to the judges of the jurisdiction that the person is in to choose whether to follow the rationale in Hopkins, or VanVleck.  That is, until the Governor approves SB 725.  At that time, there will be no opposition to DUI diversion based on “legislative intent” or conflicts with other Vehicle Code sections prohibiting diversion in DUI cases.  The person must only satisfy the criteria laid out in Penal Code section 1001.80 to be eligible.

Furthermore, the criminal defense lawyer now has a winning argument that was previously debatable and a source for judges to rule in District Attorneys’ favors.  I’m speaking of the fact that the legislature now has made clear that it intended this particular diversion to apply to DUIs.  It was argued previously, that if the legislature intended to have this diversion apply to DUIs, it would have said so.  Of course, it didn’t need to because the explicit language used in the statute was unambiguous – that it applied to all misdemeanors.  An old statute, Vehicle Code section 23640, stated that there is no diversion allowed for DUIs.  PC 1001.80 was in direct conflict with that old statute.  However, now, the argument that the legislature did not intend to have it apply to DUIs is preposterous considering it specifically went out of its way to write clarifying legislation stating unequivocally that it meant for it to apply to DUIs and was passed 38-0.  Even if the Governor does not sign the bill, it would be difficult to say the least for a judge to rule against DUI diversion on the basis that s/he believes the legislature did not intend to repeal the no-DUI diversion statute that previously blocked efforts to get DUI diversion for military defendants with the passage of 1001.80.

*The information contained in this post may not be up to date at the time you read it.  Please do not rely on its accuracy as the law changes rapidly in the field of criminal defense.  Feel free to call the Law Offices of Matthew S. Luzaich for more information on military diversion in CA.